Proud of You, Amma

The day a child is born , so is a mother… Being  the eldest child, this is doubly true, I guess, for my mother, who I call Amma.  A mother is your first teacher,  your first refuge, your eternal panacea for all troubles whether you are a one year ‘old’ infant or a 50 year ‘young’ woman. There exists an extra special bond between daughters and mothers which intensifies the day the daughter becomes a mother. An obstetrician by profession, I have lost count of the number of times I have witnessed the miracle of birth yet the novelty never wears thin.

My mother, a “simple homemaker” by definition, was and is easily one of the earliest and strongest influences of my life.  She inspired, coaxed and at times, literally dinned into us, her 3 daughters, the singular importance of being independent and self-reliant in the truest sense of the word.  That we were  “girls” never dimmed that determination even the slightest. I remember once on hearing  that she had 3 daughters, a lady at a local club get together remarked ” Oh I am so sorry!” Pat came my mothers reply… “Why? I am not!! In fact I am proud! ” She would go on to instill in us the courage to follow our dreams, never believe that there was anything that we could not do because we were ” girls”. The fact that we belong to a matriarchal society may also have helped.  The fact that we spent our childhood in Idyllic Goa also did.  Gladly supported by my father, we were allowed  tremendous freedom of choice and were vested with the power to choose from  a very young age. This manifested in me at a very early age when I refused to repeat a class because I was too young to be promoted to the next despite having topped that class.( Class I )

Breathtakingly beautiful, Amma was a head turner in her youth.  She was an intelligent sincere and a good student but her formal education was cut short by her fathers untimely demise, when she was barely 14 yrs. Not a person to let obstacles become obstacles to her dreams, she resorted to home tuition and self-study to become proficient in Hindi soon after her studies. Married at a young age to my father, she retained her spark and individuality even  while she toiled tirelessly for the family and provided an emotional anchor to my father all through their marriage. She managed our farm in the village and her managerial skills on display  prompted one of my friends to remark that she was ideal Corporate honcho material!! An avid reader and a staunch movie buff, she enjoyed whatever life had to offer at each point in her life.

A young “me” in my gorgeous mothers lap. Also seen is my father to my left

Amma, her 3 daughters and her grandchildren in 1995

The  care and support continued through my early years as a mother as I , by then a young doctor in the armed forces, struggled to balance a demanding career, marriage and kids. When I had to make a choice of a subject for PG, she supported me in the best way possible by spending valuable time with me and my son. Her immense strength and love was evident when she came to my  duty station  the day the last rites of my father was completed and yet never disclosed to me the fact that my father was no more as I was going through a complicated pregnancy. She even went to the extent of wearing the Taali ( a mangal sutra/mark of a married woman)  till I was finally told the truth on the 15th postnatal day. Hats off to her especially as my father’s death at 61 was a sudden unexpected and devastating event for my mother who was barely 52 then.  I sometimes wonder whether  I would be ever be able to do that.

It has not always been hunky dory. Being strong-willed and independent women, we have our differences of opinion, disagreements and discussions, but the underlying bond has only grown stronger and stronger over the years. To date we still talk for hours on end… sometimes over the phone, sometimes in person.  She is an integral part of my life even today and I like to think that I am a part of hers too.

She turned 75 last week and as per her wishes we celebrated it in Guruvayoor a temple town of Kerala. My sisters and my entire family made it a point to be there and it was a joyful occasion indeed. We sisters  had  initially made a plan of celebrating it as an event  attended by close family and friends but finally gave in to her wishes.

The family gets together on her 75th bday

I’d published this post way back in 2013….. the feelings remain unchanged …. she still  continues to  be an inspiration – you don’t have to always  burn your bras to prove that you are a thinking, independent, woman with a mind of your own……  Salute!!

I believe every woman has TRUE BEAUTY within her in all the roles she plays. For over 18 years across 650 plus salons across the country, Naturals has been helping the Beautiful Indian Woman get more Beautiful.

This site uses Akismet to reduce spam. Learn how your comment data is processed.

I love weaving my thoughts and daily life into words and posts. A doctor (ObsGyn Specialist) by profession and a blogger by choice, I am a wife to a supportive and lifelong-best-friend-husband and mother to two wonderful kids - a strapping young lad of 27 and the world's "bestest " 20 year old daughter! I love my home, my job, reading, writing, traveling, music and movies. My posts reflect my interests and facets and is a personal space used for interacting with the lovely people I meet through this forum. Happy writing and happy reading, everyone! Cheerz!! 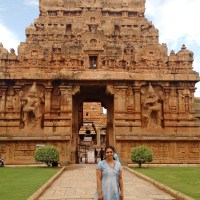